About I’m a Scientist

I’m a Scientist is like school science lessons meet the X Factor! School students choose which scientist gets a prize of €500 to communicate their work.

Scientists and students talk on this website. They both break down barriers, have fun and learn. But only the students get to vote.

This is the Helium Zone. It has a range of scientists studying all different topics. Who gets the prize? YOU decide! 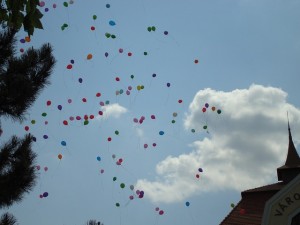 Helium, pronounced hee-lee-um, is a gas that is commonly found in balloons, and is what makes your voice squeaky when it’s inhaled (for health and safety reasons, we can’t recommend that you try this at home). The reason this happens, is that helium is much lighter than air, so it moves faster over your vocal chords, and they vibrate faster. This causes the pitch to increase.

Because helium is lighter than air—which is made up predominantly on carbon dioxide, nitrogen, and oxygen—so when a balloon is filled with it, the balloon will float above the air. Hydrogen could also be used to make balloons float, and is even lighter than helium, but because helium is so unreactive it doesn’t burn, making it much, much safer than hydrogen. 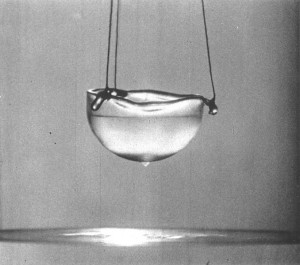 Superfluid helium climbing the sides of a bowl and pouring out the bottom. [Image: Wikipedia/AlfredLeitner]

Helium is named for the Ancient Greek word for the Sun, as when it was first discovered in the early nineteenth century, people thought that could only exist on the Sun. Today, we know that while it does exist on earth, it is only in the atmosphere in very, very small amounts; and some people think we should be using less of it, and treat it as an “endangered element”.

When helium is cooled to -259 C (for reference, the coldest temperature ever recorded on earth was about -90 C) it becomes something called a superfluid. Superfluid helium is a more like a liquid than a gas, but is somehow able to climb up the sides of a bucket, and pour out.

Teachers don't need to book, and students are free to drop in and talk to the scientists.. If they have any burning questions or haven't yet experienced a live chat.